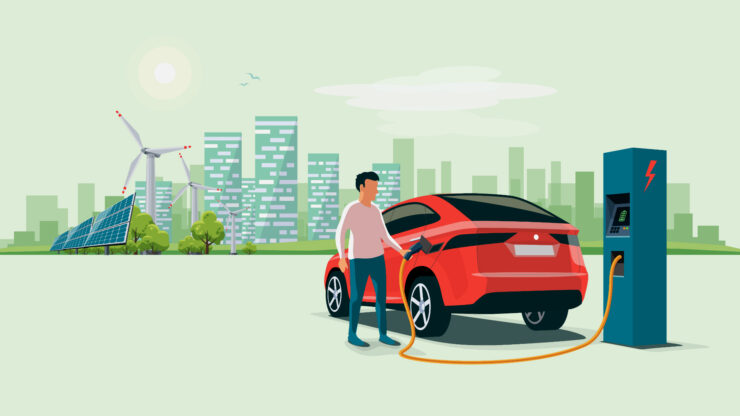 Electric vehicles have attracted the attention of India’s policy makers as clean technology alternatives due to their multiple advantages like higher efficiency and lower air pollution in short to medium term and reduced CO2 emissions. Read the complete article to know more about electric vehicles trends in India.

India is the fifth-largest auto market with 3.49 million units combined sold in the passenger and commercial vehicles categories. It was the seventh-largest manufacturer of commercial vehicles in 2019.The Indian Electric Vehicle Market was valued at USD 5 billion in 2020, and it is expected to reach USD 47 billion by 2026, registering a CAGR of above 44% during the forecast period (2021-2026).

According to an independent study by CEEW Centre for Energy Finance (CEEW-CEF), the EV market in India will be a US$206 billion opportunity by 2030 if India maintains steady progress to meet its ambitious 2030 target. It needs an investment of over US$180 billion in vehicle production and charging infrastructure.

The Indian electric vehicle market has been impacted by the outbreak of the COVID-19 pandemic because of the supply chain disruptions and stoppage of manufacturing units due to lockdown restrictions in India. However electric vehicles market is still in its nascent stage in India but it is expected to grow rapidly during the forecast period due to various government initiatives and policies and the EV big players and the Startups.

India is making hard efforts to electrify the buses like the China, it has the largest electric bus fleet in the world. Many state governments have already started procuring electric buses from Chinese and local electric bus manufacturers.

The Union Transport minister inaugurated India’s first inter-city electric bus service in February 2020. The Mitra Mobility Solution manufactured these buses with a range of 300 km on a full charge.

India leading Foton PMI in 2019 was planning to invest around INR 500 crore in a joint venture with Beiqi Foton Motor Co. of China to manufacture electric buses in India. It has already given five electric buses to one of the airlines for internal operations.

In October 2021, the Brihanmumbai Electric Supply and Transport (BEST) had announced that it will have around 50% of its buses to become Electric Vehicles by mid-2023 said Environment Minister Aaditya Thackeray.

The Minister told about the signing of Memorandums of Understanding (MoUs) with Women4Climate, Cities4Forests and Transformative Urban Mobility Initiative (TUMI) beneath Mumbai’s Climate Action Plan (MCAP).

“We will have 1,900 electric buses in Mumbai by mid-2023. Also, 200 double-decker buses will be procured. The entire bus fleet will be turned to electric vehicles. We are also working on a renewable source of electricity,” stated Thackeray.

The BEST in 2020 had announced that it is all set to hire 300 electric buses under the central government’s FAME-2 scheme. BEST in its contract for wet-leasing 300 electri

buses urged the operator to give preference to woman drivers. The BEST’s fleet is strengthening its fleet by adding 300 electric buses.

In 2019, Uddhav Thackeray, the chief of Shiv Sena introduced 10 new electric buses which were enlisted into the fleet of the Brihanmumbai Electric Supply and Transport (BEST) Undertaking.

In October, the BYD Company Ltd the world’s leading electric bus manufacturer has announced that it has sold 68,018 battery-electric buses worldwide which helps to eliminate 114,947,040 tons of CO2 emissions, 1,836,432 cars worth of emissions, 80,160 tons of nitrogen oxide, 23,805,600 lbs. of diesel particulate matter according to the transportation govt calculations.

Recently in international market, Opibus an African electric mobility company has announced that it has closed on a round of equity and grant fundraising totaling $7.5 million in pre-series A round.

As per the company, this is the largest amount that is raised by an electric mobility company in all of Sub-Saharan Africa. The funding raised by the company will be used to scale its operations in electric motorcycle and bus manufacturing in Africa.

The Swedish-Kenyan company raised $5 million in equity and $2.5 million in grants in a round led by Silicon Valley fund At One Ventures, backed by Factor Ventures and pan-African VC firm Ambo Ventures from the angel investors.

India is a home to two-wheelers however, the two-wheeler sales in India saw a decrease from the previous years to 15.12 million units in financial year 2021.

The EV industry is transformed a lot even the industry is not yet in a fully developed stage. India has witnessed electric vehicles sales three times in the first half of the ongoing fiscal.

In the first half of FY22, EV sales have more than tripled to 1.18 lakh units which include 58,264 electric two-wheelers and 59,808 three-wheelers and the sales of ICE cars has lowered.

The rise in fuel prices has boosted the sales of the electric two-wheelers as consumers are looking for alternatives.

The Department of Heavy Industries has announced incentives for electric two-wheelers in India. The Center in its notification had announced the amendments made in the FAME-II (faster adoption and manufacturing of electric vehicles).

This step from the Indian government will definitely bring massive change and increase in the adoption of electric vehicles. It will also help India to achieve the target of making India an electric vehicle country by 2030. Currently, electric vehicles are much costlier than ICE vehicles. But with the reduction of the prices and adding up the incentives will directly help the customers to buy an electric two-wheeler at some reduced price.

The government is taking strict actions to curb the emission in the country. the jump from Bharat Stage V (BSV) to BSVI emission standards is expected to benefit the Indian electric scooter and motorcycle market, by raising the prices of petrol-driven two-wheelers by 7-15%. From 1st April 2020 onward, automakers are only allowed to sell BSVI-compliant vehicles in India this is again a push towards the electric variants.

The EV startups and original equipment manufacturers (OEMs) are also taking initiatives for the adoption of electric vehicles in India.

The electric vehicles are getting a great support from the various governments such as the Kerala Transport Minister Antony Raju said that KSRTC will reduce bus fares. The passengers can carry electric bikes and scooters and bicycles in Kerala State Road Transport Corporation (KSRTC) buses.

The Kerala government had announced that it has introduced 1 million EVs by 2022. It targets 10 million EVs on roads. The newly registered private EVs will get a tax refund. To develop e-mobility Rs 12 crore has been given as ‘e-mobility fund,’ which is used for the tax subsidy to 10,000 electric autos.

The Union Cabinet has approved a revised PLI (production-linked incentive) scheme for the auto industry and the auto component industry with a budgetary outlay of Rs. 26,058 Cr for five years. It has been approved to promote the manufacturing of electric and hydrogen fuel cell vehicles in India.

The policy will boost to manufacture of electric vehicles as well as helps in generating over 7.6 lakh job opportunities. The PLI scheme will incentivize the emergence of advanced automotive technologies’ global supply chain in India. The PLI scheme will bring fresh investments of over Rs 42,500 crore in five years and an incremental production of over Rs 2.3 lakh crore.

Energy Efficiency Services Limited (EESL), under the Ministry of Power, Government of India, through Convergence Energy Services Limited is implementing an e-Mobility Programme with the objective to reduce dependence on oil imports & to provide an impetus for domestic electric vehicle manufacturers, charging infrastructure companies, fleet operators, service providers, etc. to gain efficiencies of scale and drive down costs, create local manufacturing facilities, grow technical competencies for the long-term growth of the electric vehicle (EV) industry in India and to enable Indian EV manufacturers to emerge as major global players.

If you are an EV manufacturer or EV Dealer or EV Supporter who want to share news related to electric vehicles on our website, please send an email to crm@electricvehicles.in